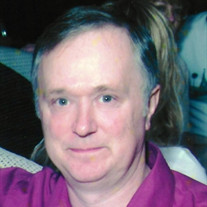 Alan Stankus, 68, of Centralia, passed away Saturday, December 12, 2020 at Saint Louis University Hospital in St. Louis, Missouri, after a long battle with Lymphoma. He was born August 13, 1952 in Aurora, Illinois, the son of John Stankus and Phyllis (Spears) Stankus. He married Debbie Murray on July 6, 1985 and she survives in Centralia. In addition to his wife of 35 years, Debbie Stankus of Centralia, he is also survived by his two daughters: Sandra Heiman and husband Paul of Compton, Illinois and Kari Challand and husband Mark of Steward, Illinois; five grandchildren and two great-grandchildren; a sister: Carole Lanham and husband Darrell of Pekin, Indiana; a sister-in-law: Onie Stankus of Starlight Beach, Florida; and several nieces and nephews. Alan was preceded in death by his parents: John and Phyllis Stankus and a brother: Bob Stankus. Alan worked at Caterpillar in Montgomery, Illinois for 43 years and worked at Sears Automotive for 20 years. He was a hard worker and would give his shirt off his own back for anyone that was in need. He loved traveling and going on vacations with his wife, Debbie. Alan loved spending time with his four legged friends: Coco and Hannah, and his wife: Debbie. Per Alan's wishes, cremation rites will be accorded and a Celebration of Life Service will be held at a later date with burial to follow at Hillcrest Memorial Park in Centralia. In honor of Alan, memorial donations may be made to House of Hope and the Centralia, Illinois Relay for Life and will be accepted at the Sutherland-Garnier Funeral Home and Cremation Services at 235 North Sycamore Street Centralia, Illinois 62801, (618)532-3523, who is honored to be of service to the Stankus Family. Online condolences may be made to the family by visiting www.sutherlandfuneralhome.com and the Sutherland-Garnier Funeral Home Facebook Page.

Alan Stankus, 68, of Centralia, passed away Saturday, December 12, 2020 at Saint Louis University Hospital in St. Louis, Missouri, after a long battle with Lymphoma. He was born August 13, 1952 in Aurora, Illinois, the son of John Stankus and... View Obituary & Service Information

The family of Alan Stankus created this Life Tributes page to make it easy to share your memories.

Send flowers to the Stankus family.